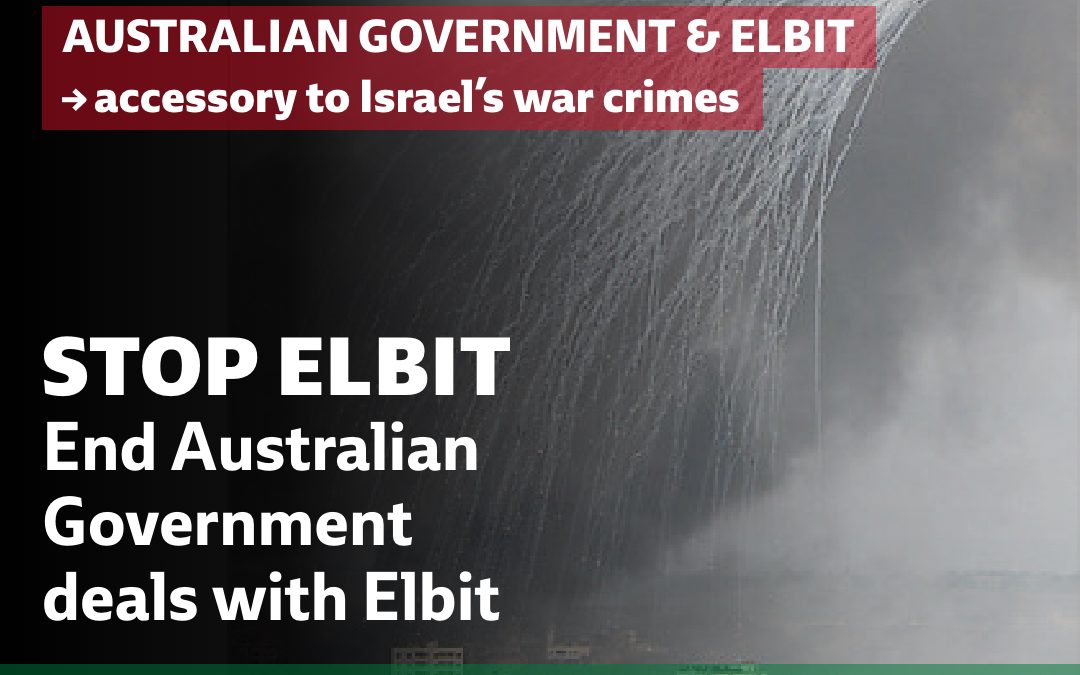 Civil society organisations working for human rights for Palestinians and others welcome the news of Australia’s sovereign wealth fund, the Future Fund’s exclusion of Israeli arms manufacturer, Elbit Systems Limited from its investment portfolio because of allegations of its involvement in the production of cluster munitions.

The organisations call on the Future Fund as part of its duty to undertake responsible investment and human rights due diligence, to investigate its investment portfolio and divest from any entity involved in or complicit in serious violations of international humanitarian law and human rights against the Palestinian people. Some of these serious violations include credible and well documented abuses which amount to serious crimes under international law, including war crimes and crimes against humanity.  Australia’s public funds should not be involved in furthering grave human rights abuses.

They further call on the Victorian Government to immediately cease its partnership with Elbit Systems Australia, a wholly owned subsidiary of Elbit Systems, to establish a research ‘Centre of Excellence’.

The organisations call on the Australian Government to suspend its defence cooperation with Israel and any facilitation of defence industry partnerships. These recommendations were supported by a coalition of Palestinian human rights organisations in a 2021 submission with the ACIJ to the Department of Foreign Affairs and Trade which is currently conducting a feasibility study into a Free Trade Agreement with Israel.

The Palestinian people suffering under decades of Israeli military occupation and apartheid have called on the UN Security Council and all states parties to the Arms Trade Treaty, which includes Australia, to impose a two-way arms embargo to protect Palestinians lives.

The organisations are encouraged by the Australian Government’s rapid response to the crisis in Ukraine through implementing measures in responding to and condemning Russia’s illegal invasion and act of aggression in Ukraine. The Australian Government must respond similarly to Israel’s serious, decades long and continued violations of international law.

“Further, the Australian Government’s eagerness to enhance defence industry cooperation and partnerships with Israeli defence firms has been forged in complete disregard of Australia’s international legal obligations, and respect for Palestinian human rights. All of these must end.”

“BDS Australia sees the Future Fund’s divestment from Elbit as a milestone development which will have ramifications right throughout state and federal Australian governments, companies and academic institutions whose partnerships and trade with Elbit are highly problematic and in breach of international law.

“BDS Australia has been calling for an end to Australia’s ties with Elbit for many years and has seen the growth of a strong grassroots movement which in 2017 saw the Royal Flying Doctors end its association with this Israeli arms company. Most recently our campaigns in relation to the Victorian and federal Government’s associations with Elbit, have been met with silence from both governments but are strongly supported by growing numbers of people who want to see an end to Australia’s complicity with the apartheid regime of Israel.”

“Australia must not explore a free trade agreement with Israel and should halt all military trade while Israel continues its flagrant violations of international law. Israeli officials are under investigation by the International Criminal Court, demonstrating the seriousness of Israel’s crimes against Palestinians. Australia must not be complicit.”

“The terrible Ukraine crisis has shown us that governments can act quickly when human rights are being grievously violated.  We call for the same level of action to protect the Palestinian people who have long suffered from Israeli military aggression. There is no place in Australia for partnerships with companies, such as Elbit Systems, that are complicit in inflicting human harm.”

Coalition for Justice and Peace in Palestine (CJPP)

Federation of Italian Migrant Workers and their Families (FILEF)

Elbit Systems is an Israeli based manufacturer of military, security and surveillance equipment and is widely known as a major research and development partner to Israel’s Ministry of Defence, who after the US Government, is its second biggest customer.

Elbit is known for its drones (UAVs) and land weapons.

In 2018 Elbit Systems completed its acquisition of Israel-state owned IMI (Israel Military Industries). IMI – which was merged into Elbit Systems Land manufactures and supplies a wide range of weapons, munitions, missiles, tanks and military technology to the Israeli military. Elbit is also a major partner to Israel’s police and Ministry of Interior. More information on Elbit can be found on WhoProfits.com.

Elbit Systems is excluded from many investment funds, pension funds and sovereign wealth funds worldwide including but not limited to:

In February 2021, the Victorian Government announced it has entered into a partnership with Elbit Systems Australia to build a ‘Centre of Excellence for Human and Machine Teaming’. For more information see  Stop Elbit BDS campaign

In September 2017, the NSW Royal Flying Doctor Service confirmed it will not contract with Elbit Systems.

Elbit is said to have supplied equipment to the Myanmar military, before the military’s ethnic cleansing clearing operations against the Rohingya people and following the military coup in February 2021.

According to West Papuan human rights advocates, Elbit is alleged to have supplied equipment to the Indonesian military used to suppress human rights in occupied West Papua.Attachments area