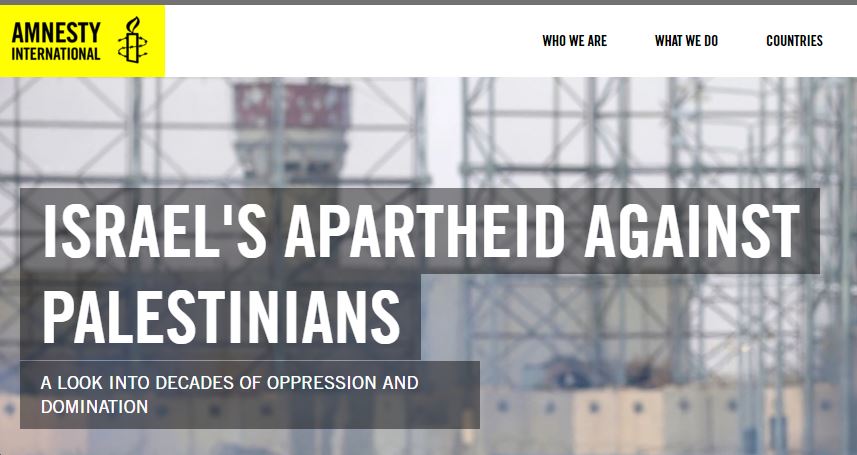 The declaration by Amnesty International that Israel is committing the crime of apartheid, in its treatment of Palestinians, must lead to enforcement action by the international community, BDS Australia said today. The AI report, which echoes previous findings by Human Rights Watch, as well as two Israeli human rights monitoring groups, B’Tselem and Yesh Din, should end any dispute about the nature of Israel’s crimes against humanity, the group added – the only topic for discussion now should be how to bring them to an end.

“Australia must stop denying, minimising or excusing Israel’s criminal actions, and instead join with others in the international community in calling for an end to the occupation of the West Bank and Gaza, dating from 1967; the scrapping of the racist Nation State law of 2018 and the dozens of laws and regulations that discriminate against non-Jews, and for Palestinians to be facilitated in exercising their lawful right of return to the homes from which they were driven out at the inception of the State of Israel in 1948”, said Jake Lynch, patron of BDS Australia and Associate Professor in the Department of Peace and Conflict Studies at the University of Sydney.

“We now have a comprehensive, evidence-based report, running to over 200 pages, from the world’s most respected human rights monitoring group, a Nobel Peace laureate in its own right, setting out exactly how Israel is in breach of the International Convention on the Suppression and Punishment of the Crime of Apartheid. The oppression of Palestinians continues only with the collusion of international actors including Australia, which promotes trade including the sale of deadly weapons with Israel, as well as offering diplomatic protection from the consequences of its crimes. This must cease”, said BDS Australia convenor and Palestinian refugee, Hilmi Dabbagh.

“Palestinians welcome this report, on top of those from Human Rights Watch and others, as long-overdue recognition of the reality we are living with every day.

Apartheid for us means constant violent attacks both by ‘soldiers’ of the Israeli occupation force and by armed racist thugs from the settler movement, driving us out of our homes and ancestral lands, denying our rights to freedom of movement and assembly. This is our struggle, but it is also a crime against humanity and a scar on the world’s conscience. The world now must take action to bring accountability, isolate apartheid and hasten its end”, said Hiba Farrar, BDS Australia committee member and Palestinian lawyer.